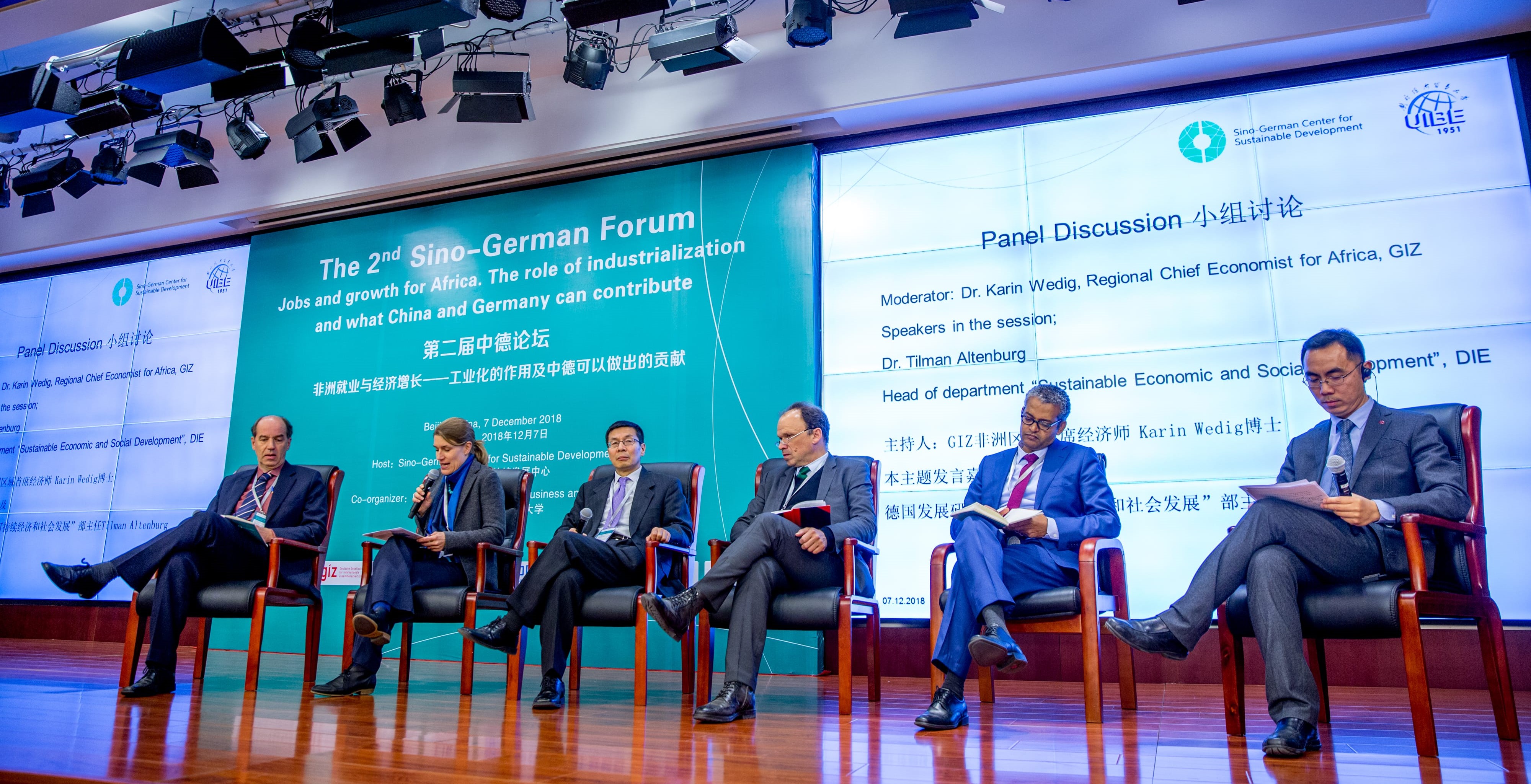 The 2nd Sino-German Forum “Jobs and Growth for Africa. The role of industrialization and what China and Germany can contribute” was held succesfully in Beijing, China. It was hosted by the Sino-German Center for Sustainable Development (CSD), and co-organized by the University of International Economics and Business (UIBE).

The contributions and discussions were centered around the role of industrialization for jobs and growth in Africa and possible contribution from China and Germany “which is of utmost importance for the realization of Sino-German cooperation objectives”, said Professor Wang Jiaqiong, President of UIBE, during his opening address. 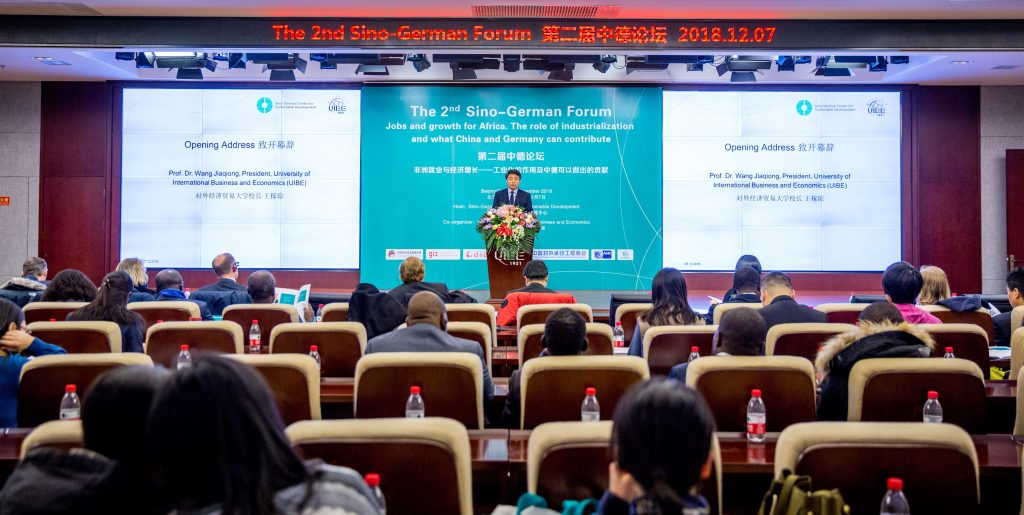 Relevance and urgency of the topic was outlined by Mr. Klaus Supp, Head of the Division “China, Central Asia, East Asia, Laos and Cambodia” in the German Federal Ministry for Economic Cooperation and Development (BMZ), “Unemployment is considered by most Africans to be the most pressing problem. […] Due to high population growth the number of young people on the labour market will continue to increase dramatically”. To address this issue, Germany establishes reform partnerships with African countries and currently puts into place a new special initiative on training and employment which aims at mobilising private investments to promote job creation and economic growth, with a particular focus on industrial parks and clusters. Mr. Supp highlighted the potential of Sino-German cooperation in this area: “China has a lot of experience with industrial parks and clusters from its own development within China. Germany is a highly valued partner in technical and vocational education worldwide. When we link that up it’s a perfect match.” 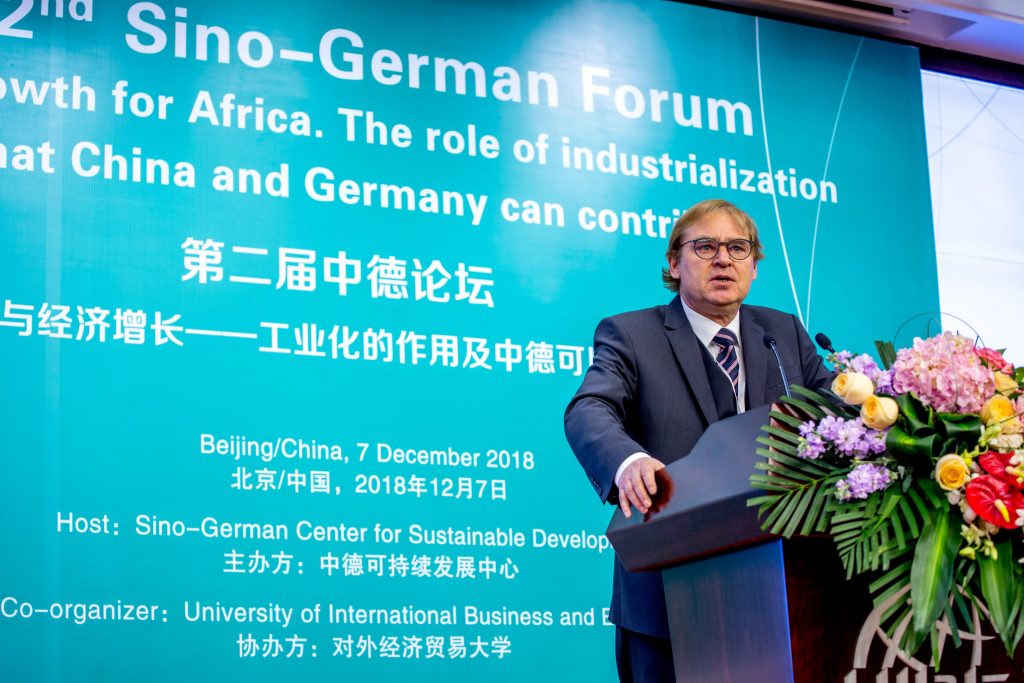 That the forum’s discussion is on time, was highligthed by Dr. Robert Dieter, Head of the Economic Department of the German Embassy in Beijing. Germany, China and other G20 countries just agreed to intensify cooperation between the G20 and Africa at the summit meeting in Argentina a week ago. Dr. Dieter saw the forum as part of the joint effort to intensify the cooperation based on the strong partnership between Germany’s Ministry for Economic Cooperation and Development and China’s Ministry of Commerce, and believes it is now the time to find synergies and explore how triangular cooperation can be more helpful to support African countries. 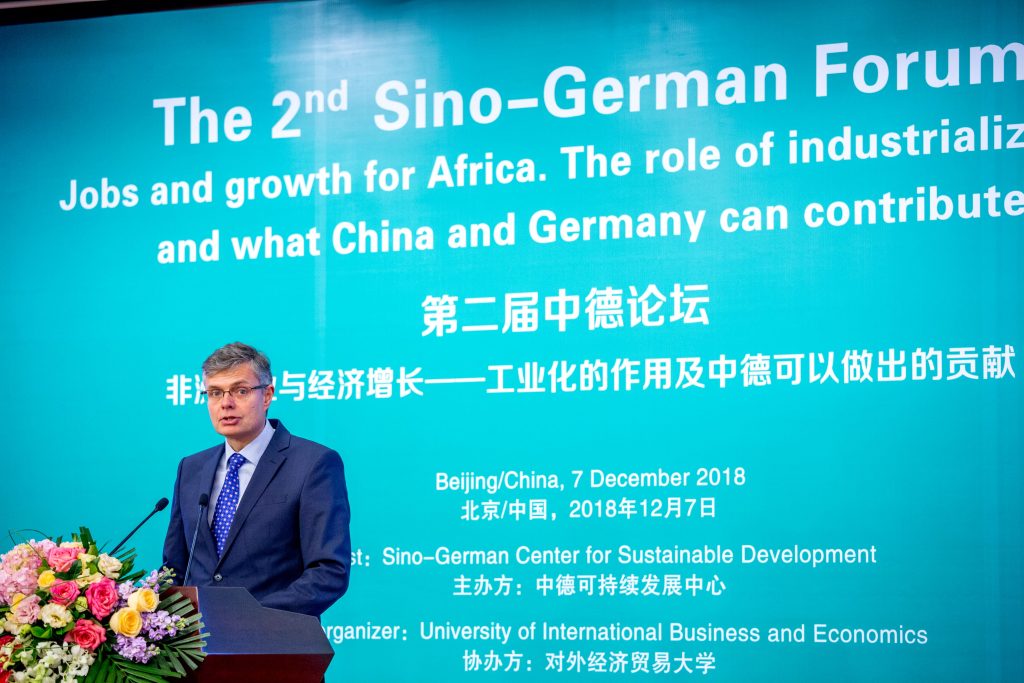 Relocation of labour-intensive industries from China to low-wage countries could have a large effect on industrialisation and job creation in Africa. If 1 percent of China’s production of apparel was shifted to African countries, African production and exports of apparel would grow by 47 percent. But to what extent is this shift happening against the background of increasing digital automation? A cooperative research project between the Center for International Knowledge on Development (CIKD) and the German Development Institute (DIE) which was initiated under the CSD delivered first findings on the implications of production relocations and the new industrial revolution for development cooperation and global economic governance.

Dr. Wilfried Luetkenhorst from DIE argued that the digital production revolution might have ‘a pervasive, rapid, and disruptive impact on developing countries’ effort to promote industrialization and growth’. Field studies show that changes in the industrial nature and the global production system are already taking place, impeding e.g. further relocation of industries to Africa. Based on case studies of selected Chinese textile companies, Dr. Chen Xiao from CIKD came to the conclusion that though the textile sector is changing from labour-intensive towards capital-and-technology intensive, the segmentation of the production process makes full automatization impossible at the current stage. Thanks to the large-scale and diverse textile market, opportunities still remain in African countries by specialization and cooperation in the industrial chain.

Industrial parks and clusters as well as Special Economic Zones (SEZs) are playing a key role in generating employment and increasing foreign direct investment. It has proven to be successful in countries such as China, Malaysia, and Mauritius, but may fail as well, e.g. some in Nigeria and India. In Ethiopia, the vision of Industrial Park development is linked with its national growth agenda, said Dr. Belachew Mekuria, former Ethiopian Investment Commissioner. According to Dr. Zeng Zhihua, Senior Economist at the World Bank, integrating the Zone Programme as part of the national development strategy is a key factor that led to the success. Chinese and German contributions are needed to tackle challenges and ‘support African solutions for growth while African countries sit in the driver’s seat themselves’, said Mr. Yiannis Neophytou from BMZ. On one hand, Germany is dedicated to providing its knowledge and experience on vocational education and capacity development. On the other, China is the largest trading partner of Africa, and the third biggest investor. Through 18 China-built economic and trade cooperation zones in 14 African countries, more than 40,000 jobs were created, according to Mr. Sheng Guofei, the director of Investment and Promotion Office of China Overseas Economic and Trade Cooperation Zone. 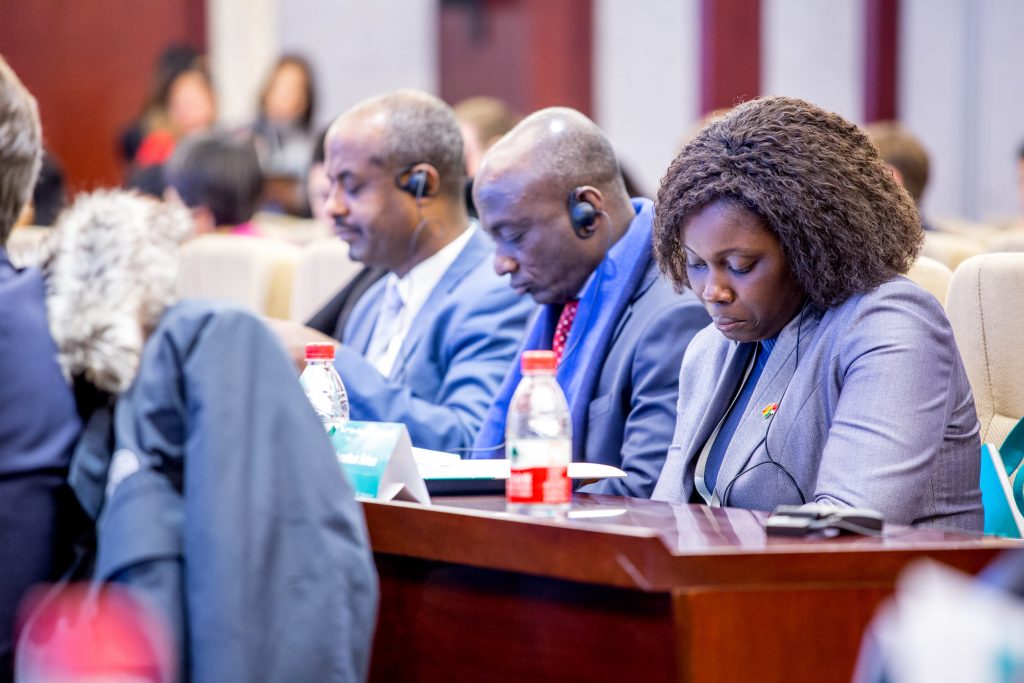 Public support to Africa’s industrial development will not be sufficient to create jobs and stimulate economic growth. Good partnerships between public and business sectors and a reasonable combination of international efforts are crucial. Through its Programme for Country Partnership and South-South and Triangular Industrial Cooperation, UNIDO promotes sustainable industrial development worldwide. Efforts towards the same goal have also been made by Germany through the BMZ initiated Special Initiative Training and Employment, trying to stimulate job creation through partnerships with companies in industrial clusters, as Michael Oos from GIZ’s private sector cooperation department illustrated.

Cooperation between Chinese and German companies can not only facilitate the industrialization of Africa but also open greater market access for foreign businesses. Hannah Ryder, CEO of Development Reimagined, expressed her believe that Germany and China can make use of Africa’s great growth potential by boosting its Foreign Direct Investment and increasing import of African goods and services to German and Chinese markets. Ms. Zhang Xiang, Secretary General of China International Contractors Association (CHINCA) sees cooperation potential in joint investment and implementation of infrastructure projects and sustainable project management because of the complimentarities of Chinese and German companies. Her opinion was echoed by Mr. Jonathan Schoo, General Manager of German Industry & Commerce Greater China (AHK), saying that trilateral cooperation can benefit all partners involved.

The Sino-German Center for Sustainable Development stands ready to facilitate trilateral and business cooperation between China and Germany in Africa. Professor Zhang Haisen from UIBE suggested that the CSD can initiate a Sino-German development network to faciliate exchange and communication between Germany and China on development policy, experience on vocational education, project management, standardization, and evaluation. 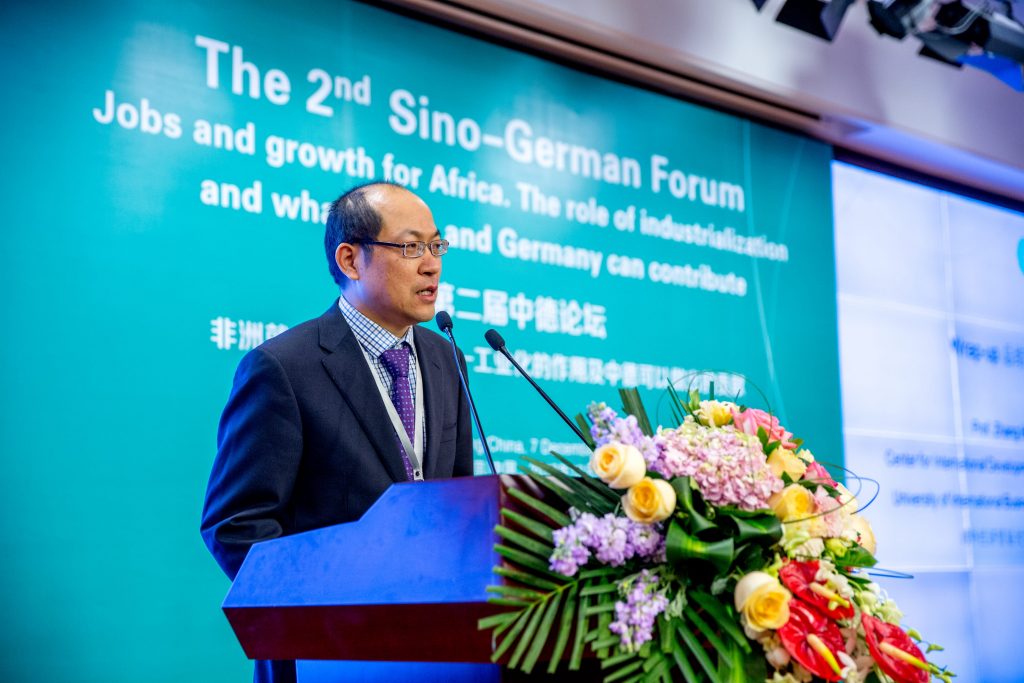 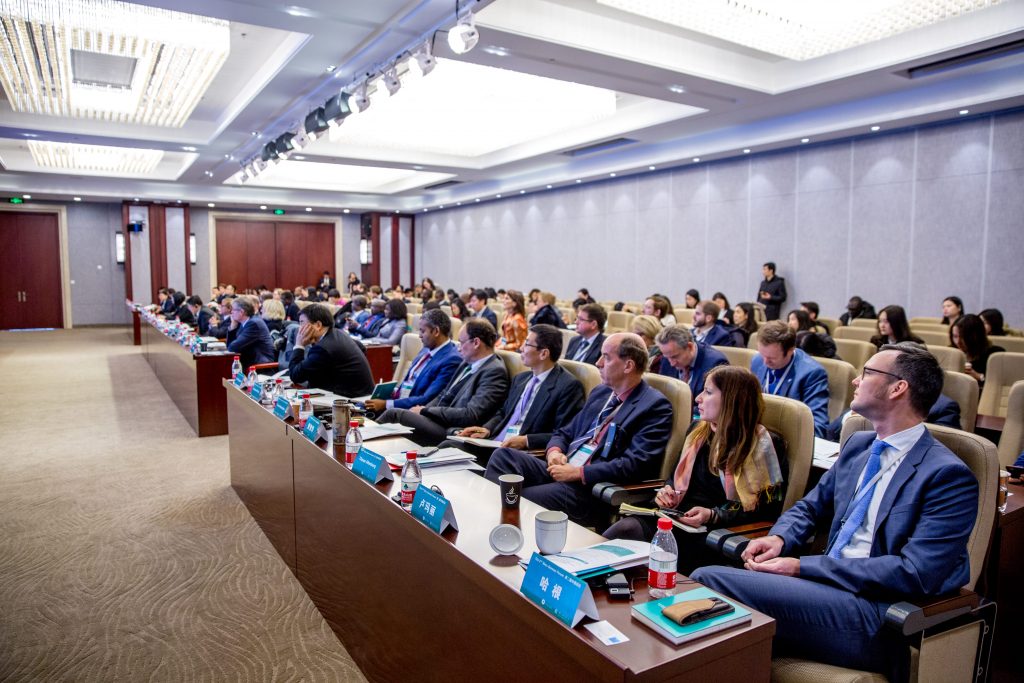